Blast from the Past Saturday

My sister Melissa has a little boy named Miles. If you've read my blog for a little while now, you might have met him before. He's this little angel, standing next to Aubriana. 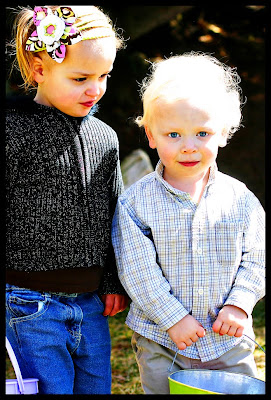 Do not be fooled.

He's a holy terror. He makes grown women quake in their carpet slippers. He like the pint-sized, angel-haired, silent-but-destructive equivalent of the Greek sirens. He lures you in with his little smile, his dimples, his round little tummy and his blue eyes, then he waits until your back is turned and destroys your entire house, dumps soap down your drain, spills chocolate milk on the floor, dumps whipping cream on the sidewalk outside, dumps flour and blueberries on the sidewalk outside, and takes off his diapers and pees on as much of your carpet as he can. Apparently, that's quite a lot of carpet.

I had one of those myself. Hang in there Mel! This one is for all the moms of destructive little boys and girls.

From August 8, 2007
My Child Has Been Taken Over by Aliens Bent on the Destruction of My House

I am at the end of my rope. 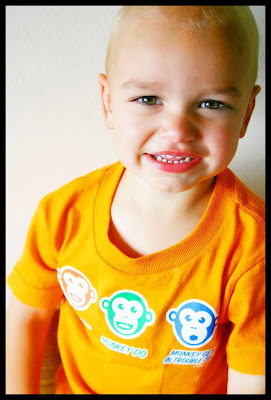 I don't know what's gotten into Griffin, but suddenly, he's a tornado of destruction. So far today:

Climbed the gate into my room, where he got out Daddy's tools and sprayed his sister with throat spray. Also used laundry as a "slide."

Bathroom, where he opened the child-protective door knob with ease. He used the liquid soap and unwound a whole thing of dental floss.

In the kitchen, he dumped on the floor a nearly new package of baby carrots that Maxton had been snacking on.

The living room, where he destroyed two scrapbook pages. Moving the scrapbooks was LITERALLY ON MY TO DO LIST. Luckily, they weren't great pages, but my goodness!

The child locks on the under-sink cupboard, where he got my Costco-sized, nearly new Cascade and dumped the entire thing out in the living room, which he proceeded to get in his eyes--he was ok after a good rinsing. He also dumped the basket of shoes out and took down all the hanging shirts in his closet (I have no idea how he gets that high, I think he's standing on the diaper pail) and broke 4-5 plastic hangers. 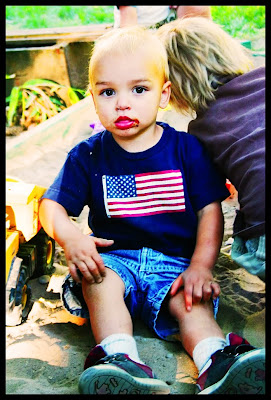 Yesterday, he broke three bowls by pushing his high chair over to the upper cabinets in the pantry where we keep the dishes.

He's napping now. I'm sure this day will be really funny in a few years, but right now, I just want to lock him in his room! I don't know what to do, because he's not old enough for punishment, he'll be two in October, and he breezes through the child proofing and it's not like I'm somewhere with the door closed or not checking on them every few minutes. I was organizing my scrap room while most of this happened and I can usually hear whatever they are getting into, but I guess he's learned to be silent. 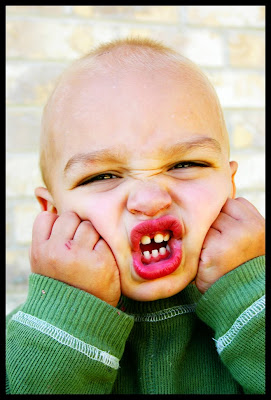 Thanks for stopping by! I love your comments and look forward to hearing from you.